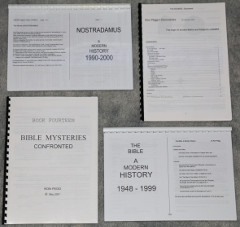 Examine and evaluate 270 pages of original research, being the following five booklets - printed A4 size and plastic comb bound.

1.  The Source
looks at ancient concepts and how they are associated with early Myths and Religions. Stories and specific Descriptions from several ancient texts are compared.

Pegg has discovered the primary Source of the ancient Myths and Religious stories.


2.  Atlantis, A New Clue
examines the descriptions by Plato concerning the mythical city of Atlantis.

Pegg has discovered the primary Source of the ancient Atlantis myth.

Pegg discovered the identity of the apparatus utilized by Nostradamus and identified many modern events documented by him.


4.  The Bible, A Modern History 1948-1999
highlights wherein the Bible some now known historical events have been documented.


5.  Bible Mysteries Confronted
examines the Historical data Theme, and provides Exercises for you to compare the religious meanings of the Old English Bible with the original Word meanings as stated in Strong's Concordance.
There is a whole new narrative reported in the Bible that is hidden by mis-translations.

Pegg found, hidden beneath the surface text stories, reports of encounters with human Time Travellers (who were incorrectly perceived as 'Angels').


-   Each Booklet has its own Evaluation SHEET

Ask our driver for a set.  $40- cash only
All Rights Reserved  © 2022 Australian TIME TRAVEL Study Group