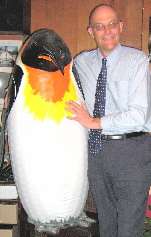 I formed my first hobby club at school in 1968. Its theme related to animals from the Artic region.
I chose as my designated animal - the Penguin. This has followed me all through my life and resulted in a friend giving me a club mascot in 1986 - a three foot high plastic penguin.

My first 'production' was a hand drawn Film Show drawn on paper as a 'strip-film' that I presented to my family in 1973 on a Disneyville Projector.

From 1976 to 1993 I produced 33 recordings of my own music (played on many different organs) onto Cassette Tapes. When organs became equipped with their own internal 16 track recorders I made my recordings direct to those organs.

In 1979 I built my own Disco Lighting System, and as lighting technician I used it at a hotel for a performing Country Band and at a Roller Skating rink.

The Bunyip Tale. It was a joint corroboration between students and staff of Enfield and Nailsworth High Schools plus past teachers and scholars of TOC (Enfield High School's lunch time Theatre Organ Club). It was to be their final "film" movie as the demands of a teacher's job diminished the time available for extra curriculum activities such as this type of venture. Video production

was also starting to supersede the use of 16mm film recording around this time.

Three exciting personal projects for me stemmed from this activity.

In 1984 I was one of a team of four who constructed the Bunyip costumes, and was given the title Bunyip

Technologist due to my development of the moving parts that were needed to animate the facial expressions. The initial idea by the producer concerning the costumes was simply to contain a child for the long shots, who could walk and wave her arms. But when the director required more life-like movements I then had to make moving eye, ear, and mouth mechanisms for both bunyips so they could be operated as hand puppets for the close-up shots; but the puppet's head still had to accommodate the child's head.

During the production of The Bunyip Tale I was the Chief Bunyip Trainer and Safety Officer who, with an assistant's help, kept the two children who wore the costumes as comfortable as possible during rehearsals and breaks from actual filming. I also supplied storage and workroom space at my home, plus transport for some props to and from filming locations.

2. Film Director - 1985
Another role I accepted eagerly was that of Director pertaining to one specific action sequence where Mrs Bunyip, driving on the road, causes 5 cars to swerve and crash.

At the end of the day's shoot my fellow film makers said about me crashing five cars..."That was a Penguin Production".

While filming was proceeding on 16mm film stock, we had all aspects of our adventure recorded on video tape. Later while The Bunyip Tale itself was in post production, I edited and produced a documentary from the raw footage presenting the three years of our activities. The result was a 54 minute VHS Video Tape documentary on The Making of the Bunyip Tale. 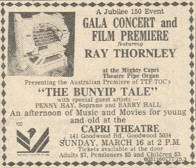 After 3 years in the making, on 16th March 1986 the TTF-TOC silent movie The Bunyip Tale premiered at the Capri Theatre.

In October 1986, enthralled by the experience of live theatre organ music, I created a community organ group of my own in Blair Athol, SA. I converted my garage into a Music Room, and over a period of eight years, up to 24 members attended monthly musical afternoons and shared their talents at ROBBs Music Group. I then moved to Surrey Downs and the music group became inactive.

In 1991 and 1994 I produced the ultimate penguin production - two beautiful daughters. After 20 years of being a fortnightly father, the girls grew up and went their own ways. Being single again and now having my house to myself, I recommenced my Penguin Production activities.

The colourful MANU in flight


His name is MANU. He was generally flying around, had done this about 8 times. Then I repositioned myself because I was missing his final approaches. After taking the shot of him in the tree, I lowered my camera and looked at him. At that time his trainer announced that it was his final flight and he would be returning to his cage. As I looked him in the eye, I told him how beautiful he was and said {to myself} that it was a pity he didn't fly straight to this tree each time as I was missing his shots (as they were out of frame and/or focus). He winked and smiled back - I felt the connection. He gave a small and gentle mumbled squawk then launched himself off the branch to return to the trainer's tree branch. I thought he was saying goodbye to me. But instead of landing on the branch as expected, he kept going, circled back and flew directly at my position, allowing me to get this final shot. Once in the tree above me he turned and looked at me, and winked and smiled. I thanked him and wished him all the best for his future. He then returned to the trainer and the flight was over. I have these photographs as a reminder of my encounter with the Adelaide ZOO's Blue and Gold Macaw - a lovely gentle creature. 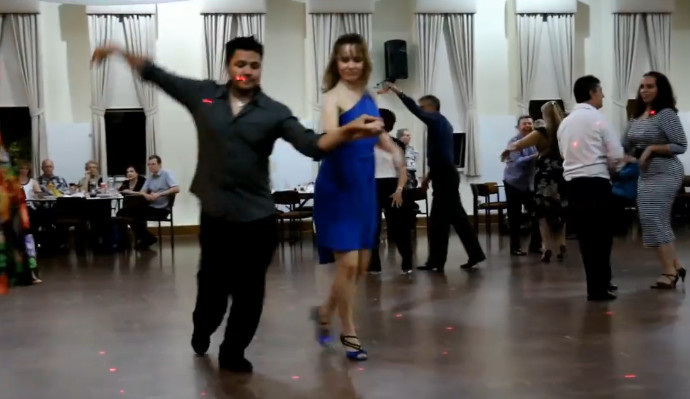 The Sun is out and the Roses are in full bloom.
Slowly coming to my ears on the soft breeze is the sound of music.
Are the birds and bees making love in the flowers ?
No, but a lovely couple are making their intentions clear to each other.
Moving and swaying to the music as if the wind is blowing them around, they glide and dance together as one - a passionate connection.
A spring day, white roses, music and dance, and LOVE - what can be more inspiring

Other Penguin Production videos can be viewed in the Organ Music, Bachata and Zouk Back-Story sections.