Between 1996 and 2001 Queensland researcher Ronald Pegg made many astounding discoveries.

He disclosed that many ancient texts translated into English have errors, and when returned to their original meanings and context, they relate a totally different story.

Over 25 ancient texts contain documented accounts of Time Travellers and their computer technology !

Some of Pegg's Original Research documents can be examined 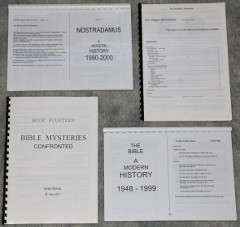 Now as Host for the Australian TIME TRAVEL Study Group, I can offer these selected Booklets to you for your personal examination and introduction to his astounding Time Travel proof.

Examine and evaluate 270 pages of original research, being the following five booklets - printed A4 size and plastic comb bound.

looks at ancient concepts and how they are associated with early Myths and Religions.
Stories and specific Descriptions from several ancient texts are compared.

Has Pegg discovered the primary Source of the ancient Myths and Religious stories ?

Yes. Time Travellers have been mistaken as 'gods'.
A Computer has been perceived to be an Oracle.

examines the descriptions by Plato concerning the mythical city of Atlantis.

Is the same theme (as discussed in The Source) present in Plato's Dialogue ?

Has Pegg discovered the primary Source of the ancient Atlantis myth ?

Yes. Certain pictures from a data disk have been perceived to be about a 'City beneath the Sea'.

Is the common Theme (as discussed in Part 1) also present in the works of Nostradamus ?

Has Pegg discovered the identity of the apparatus utilized by Nostradamus ?

Yes. He gained his 'future historical knowledge' from a historical cd-rom that he viewed on a computer (supplied by time travellers).

highlights wherein the Bible, the same Historical themes (as discussed in Part 3) are documented.

Why do the Old English words of the King James Bible not fully represent the original Hebrew and Greek meanings and context ?

Has Pegg discovered a new (type of) Bible Code, hidden beneath the Old English translation ?

Yes. It has been sitting in plain sight for over 150 years in the Lexicons of Strong's Concordance.

summarizes the Historical data Theme, and provides Exercises for you to compare the religious meanings of the Old English Bible with the original Word meanings as stated in Strong's Concordance.

Is there a message in the Bible that is hidden by mis-translations ?
If so, to what does it refer ?
Is the common Theme (revealed in Parts 1 & 2) also present in the Bible ?

Has Pegg identified the original Source of, not only the ancient Myths and Religions, but the Bible stories too ?

Yes. Many biblical accounts perceived time travellers as ANGELS, and their associated accounts of a 'future End Time history' come from actual historical events documented on two 20th century historical cd-roms (that were viewed on a computer, supplied by the time travellers).

Each Booklet has its own Evaluation SHEET.

This set of printed Booklets is available for $40 cash when you attend my hobby rooms.
They are yours to take away and keep.