Our Annual Shows are the highlight of the year and each reflect on the enthusiasm and skills of our members.  A nice example of this was our Spring Show in 2003  (off-site page, new window opens) 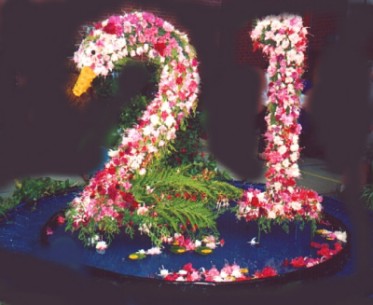 This beautiful swan, almost entirely constructed from fuchsias, was the highlight of our 21st
Show held in 1991 in the Gymnasium at Nailsworth High School, Regency Road, Enfield.
1996 - 1998   in the Walter Duncan Hall at the Wayville Showgrounds.

2001   St Peters Town Hall, but an autumn show instead of a spring show.


PICTURES from Past Shows


2009  This year's show was cancelled at the last minute because of the extreme temperatures
that were forecast for that weekend. It was deemed that our plants (and members) would
have suffered, and that few people would have attended.

Photographs
The AFS wishes to thank all those members who have supplied photographs reproduced within this website.